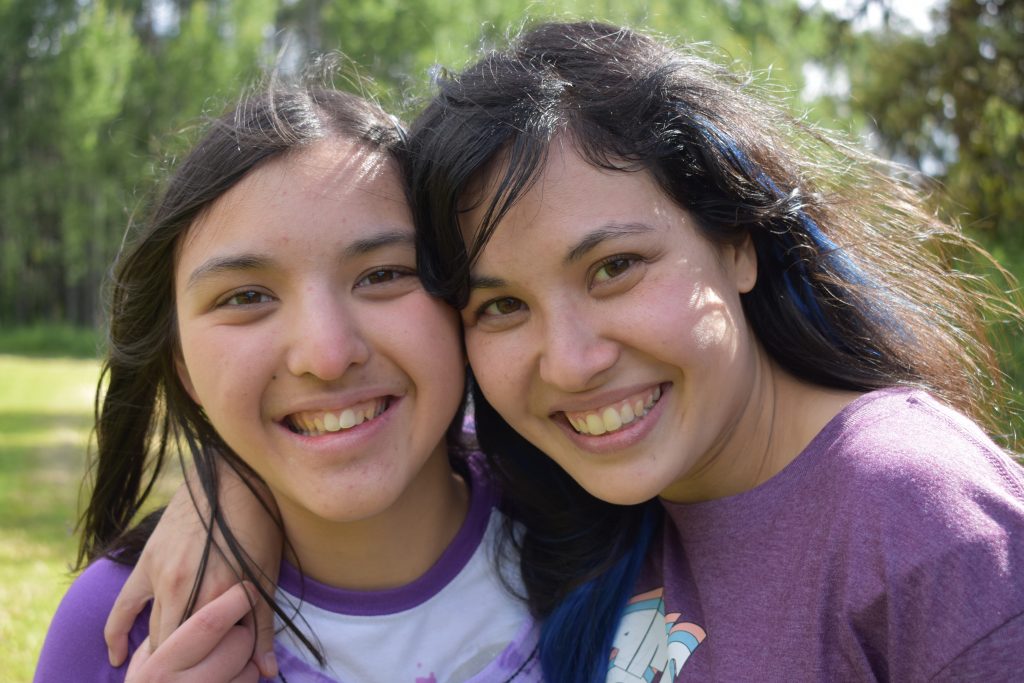 Do you know what a vanguard is? Merriam-Webster defines it as: “The troops moving at the head of an army.” The vanguard rushes into battle first, so the rest of the army has the courage to follow. Being in the vanguard is dangerous. King David placed Uriah the Hittite in the vanguard in order to secure the man’s demise. David ordered his general, Joab, to pull the rest of his troops back, leaving the vanguard to battle alone. That was all it took to kill his rival. 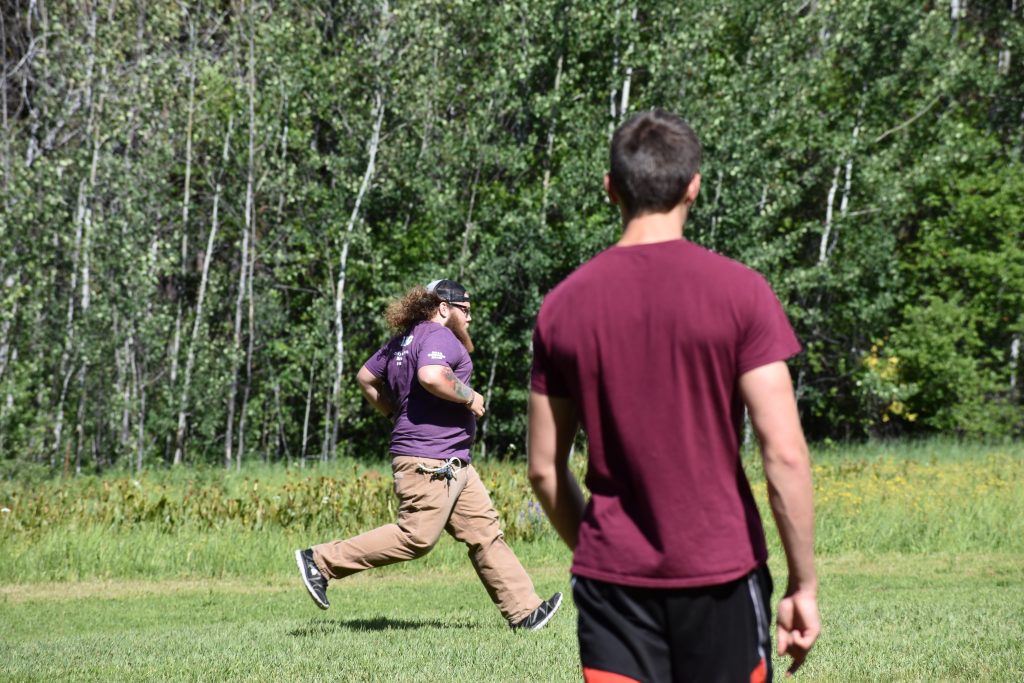 People say it is hard to get teens to talk. That’s not necessarily true. Teens long for honest conversation, deep thinking, the complexities of God’s Word, and the fierce beauty of God’s love for them. The problem? Teens require a vanguard before they will charge forward. 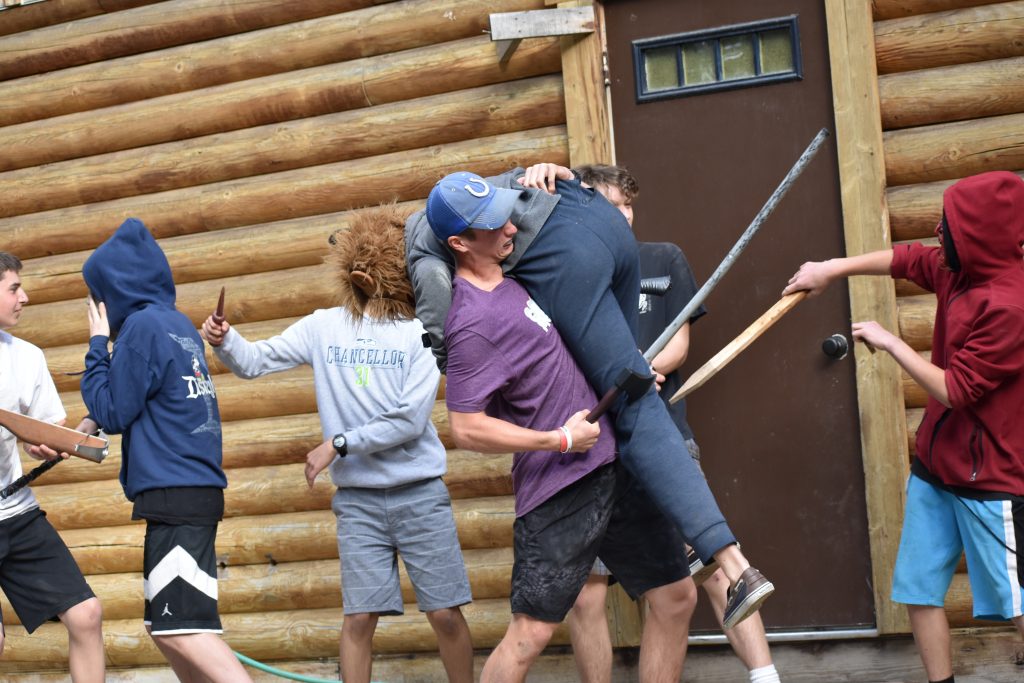 It’s dangerous to be in the vanguard, and few of us will place ourselves in such a position of vulnerability. But that is exactly what I saw the counselors and speaker doing this week. They were the vanguard and when the campers saw them marching ahead, they rushed forward in a mighty wave. 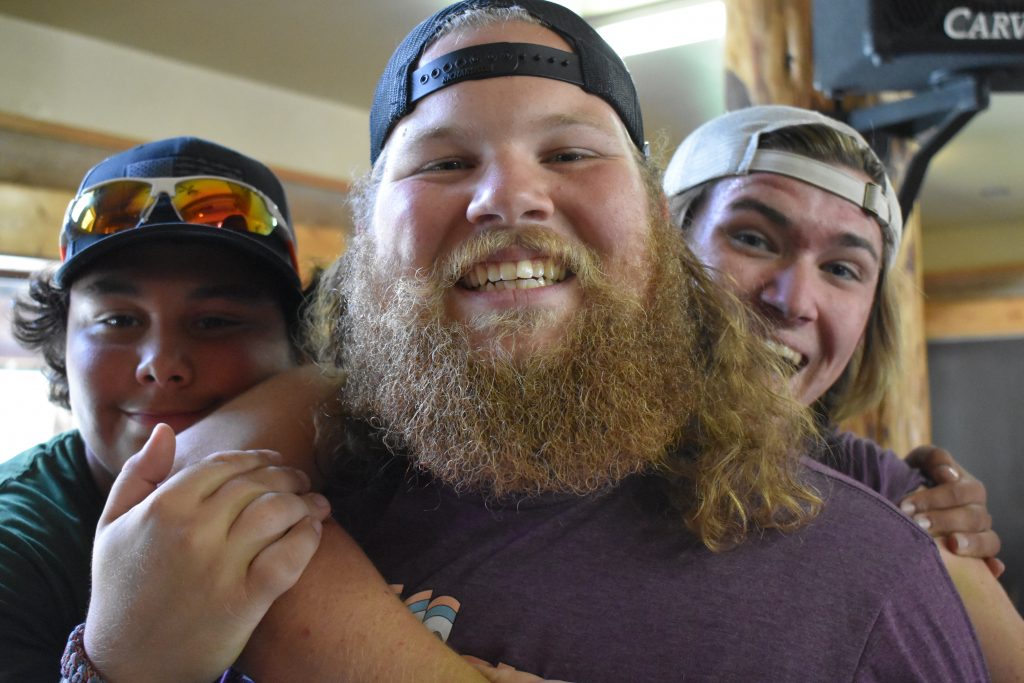 When sharing The Word with children, we stick to the gentle truths of God. His love. His sacrifice. His plan to rescue us from our sin and make us more like Him. But teens must have the whole truth, and nothing but the truth or they refuse to take you seriously. Teens know that life is gut-wrenchingly hard, if you are not real about this, they find it hard to trust us. And so those ministering to these savvy and skeptical not-quite-adults must be honest in a way that hurts. Exhausting and brutal honesty is required in the vanguard. 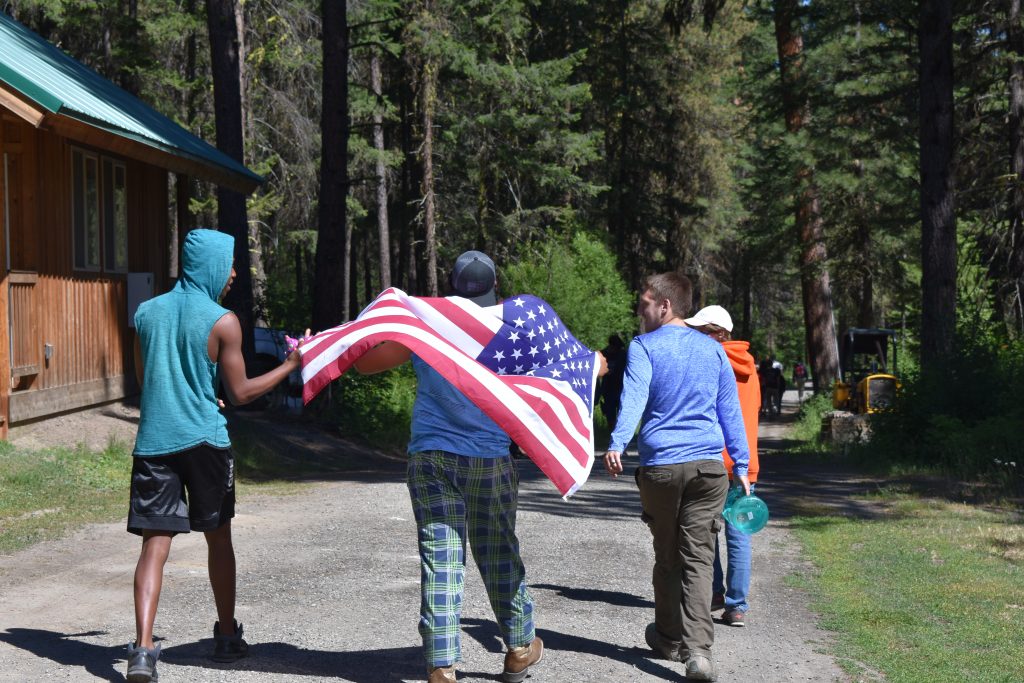 One of our guy counselors described the week as “pay to play.” Sometimes you must pay to play a game. He had to pay to play all week. Cabin discussion came and everyone went around the circle. Despite a thoughtful chapel, the answers were superficial. So the counselor realized that he had to lead or his guys would never rush into the fray. 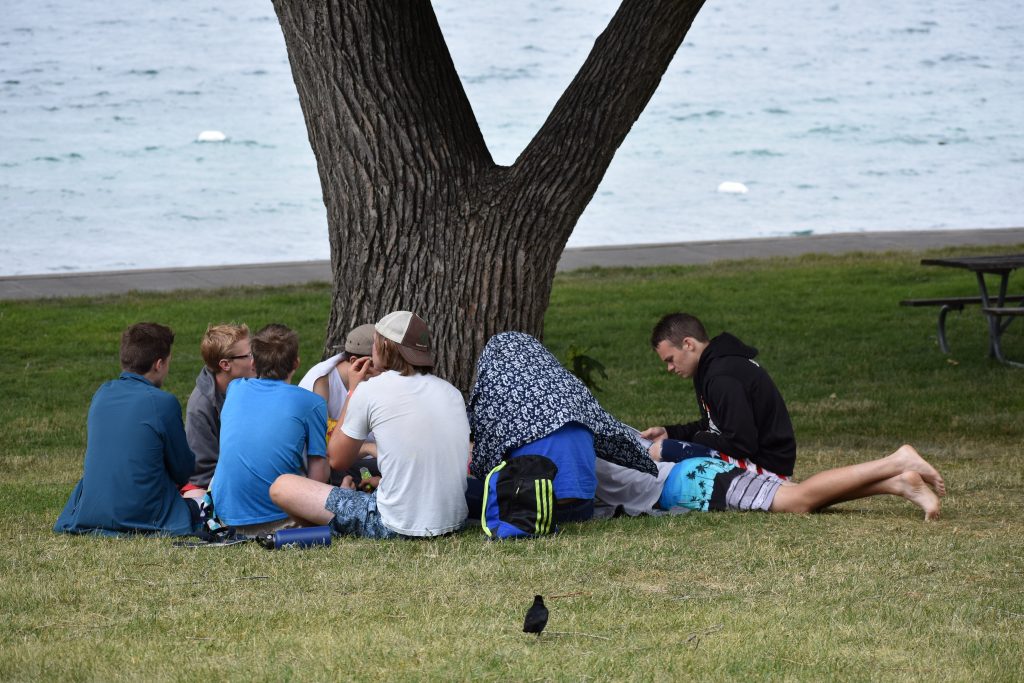 He shared from his own struggles, with the kind of vulnerability that’s both exhausting and terrifying. Without him asking, his campers went back and answered that first question again. This time, they were honest with him and themselves. The cabin only got through half of the discussion questions and it took them two solid hours to do so. Teens can go deep, but they must have a vanguard. 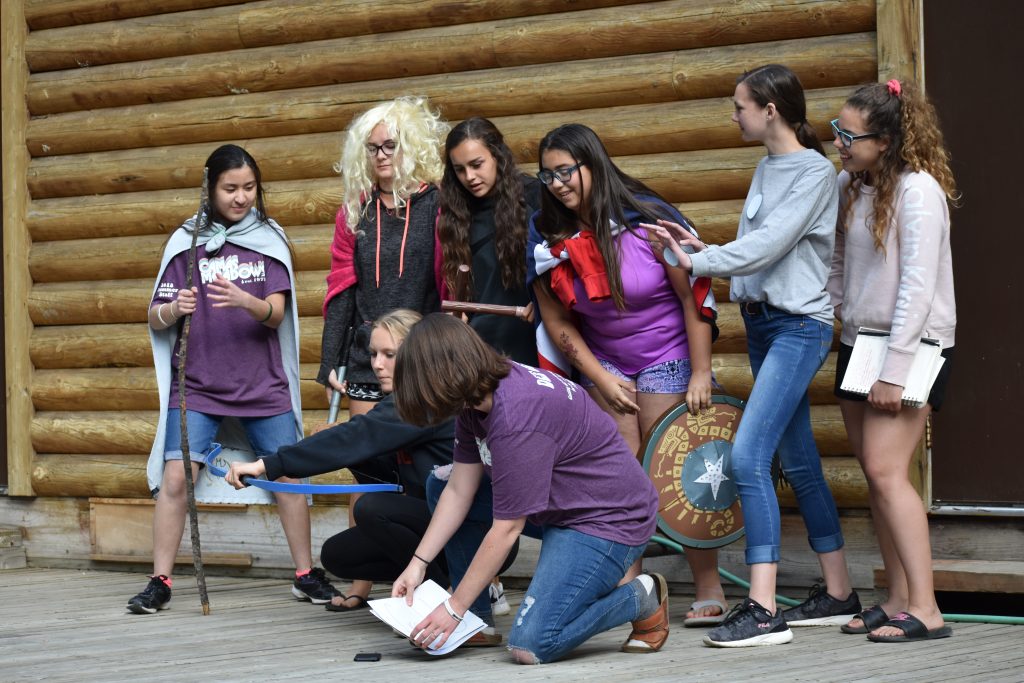 The discussion topics were not easy ones this week. Van Helsing, our speaker, chose the theme: Jesus Christ–Monster Hunter! 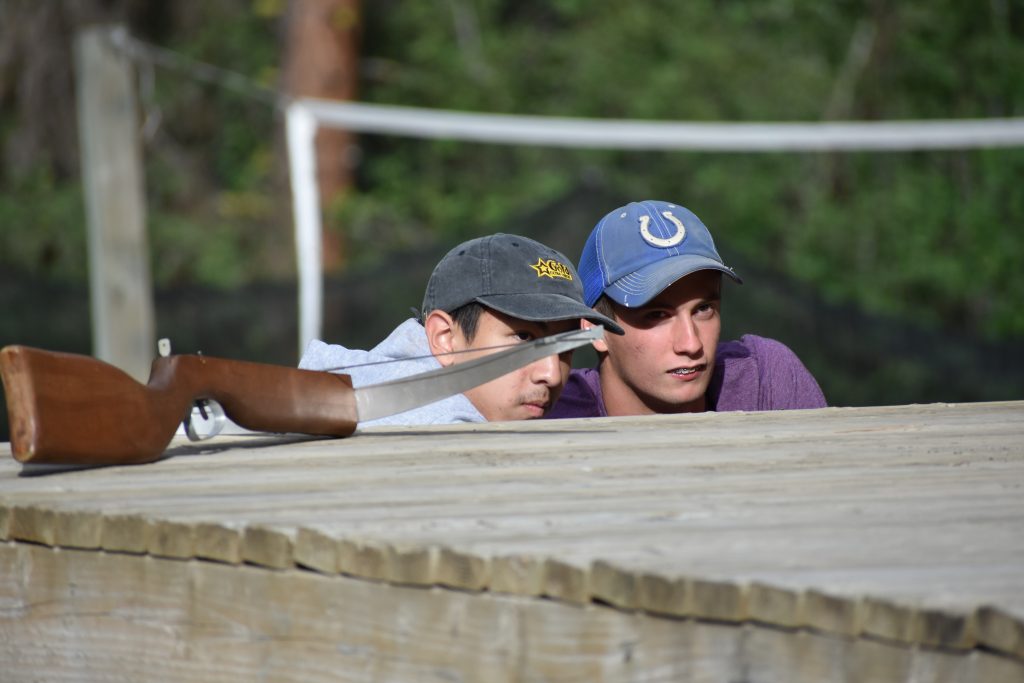 He spoke on the things that smash kids (and adults) flat in their walk with God. The monsters of Pride, Depression, Lust, and Addiction. How on earth do we find victory when being hunted by such powerful enemies? 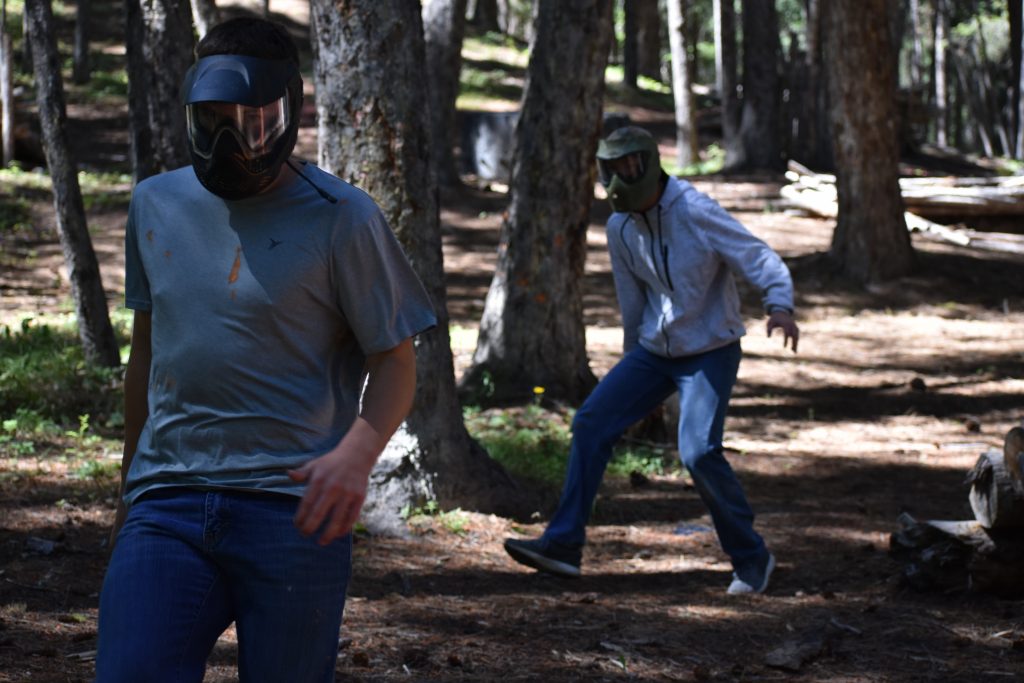 I John 3:8–“The one who does what is sinful is of the devil, because the devil has been sinning from the beginning. The reason the Son of God appeared was to destroy the devil’s work.”

Thankfully, Jesus Christ came to seek and to save those who are lost and the Bible has much to say about each of these monsters. But just because the Bible speaks on these struggles does not mean they are easy to overcome, or easy to talk about in the forthright manner that teens demand. 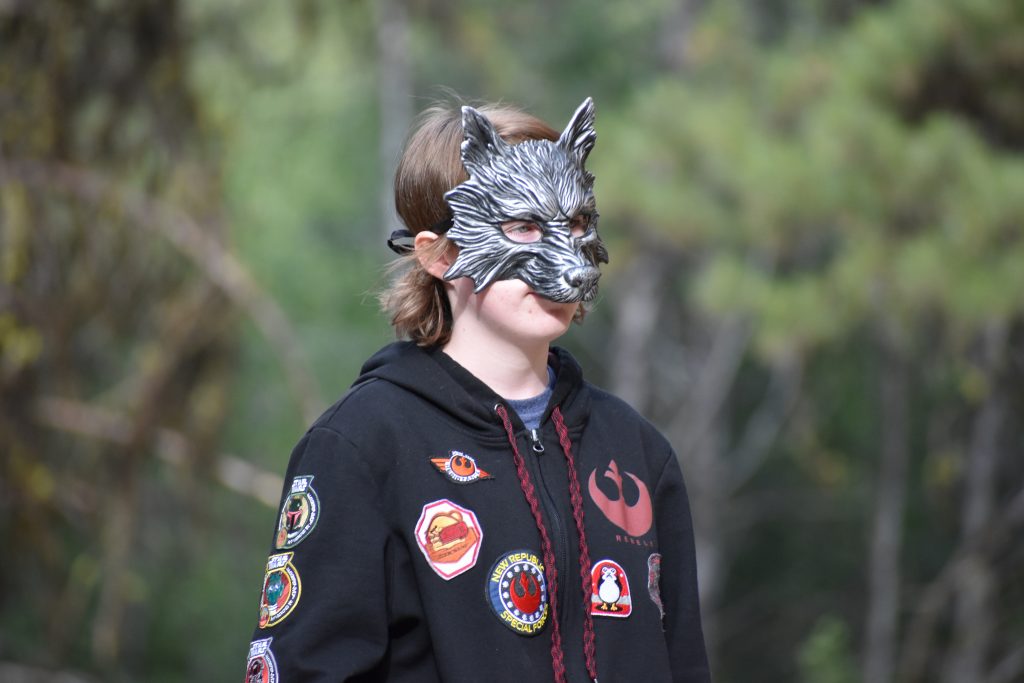 Nonetheless, we saw God at work all over the place this week. 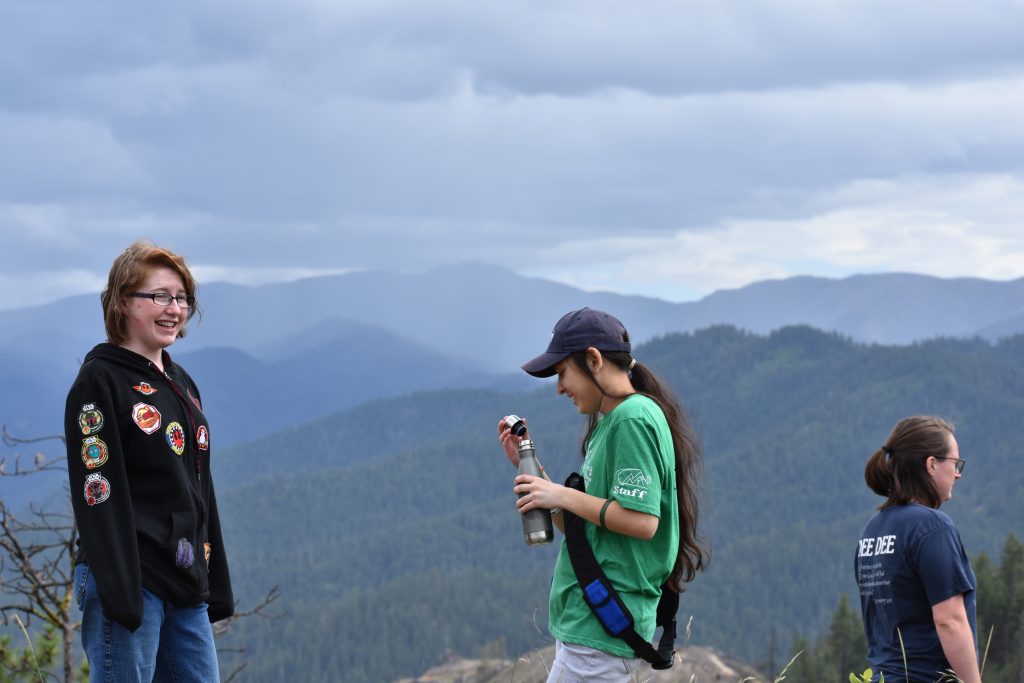 I stood in the lodge one night, swept away as I listened to worship. Camp is strikingly unique in the worship department. You rarely hear people sing at the top of their lungs out in the world or in church, but at camp, the sound is something between a song and a musical roar. The amazing thing about hearing teens worship, is that many of them have had musical training of some sort. They are glorious to behold. And that rising song was punctuated by the unique strains of one special needs camper, singing with all her heart. So so lovely. 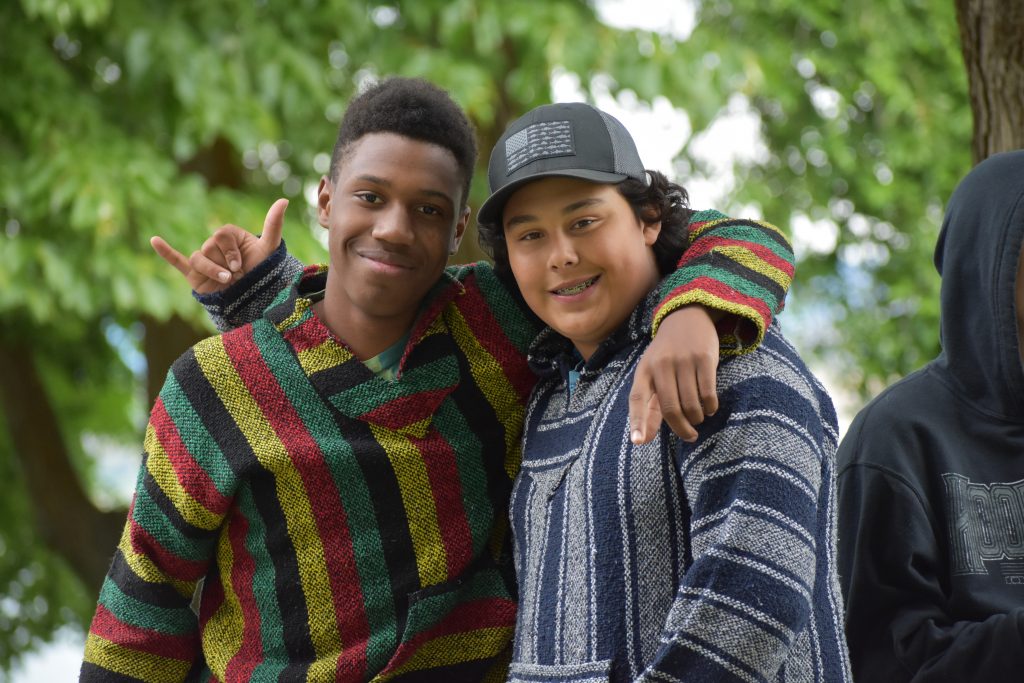 Then there was the simple beauty of service. I saw a counselor who struggled with asthma, constantly give his all, even though he felt terrible. He wheezed and coughed and yet he volunteered to be the “Old Man Hunter” in the night game. A role that worked well for someone who was already wheezing and coughing, and was willing to sit in the dark forest, bringing the game to life for a swarm of teens. 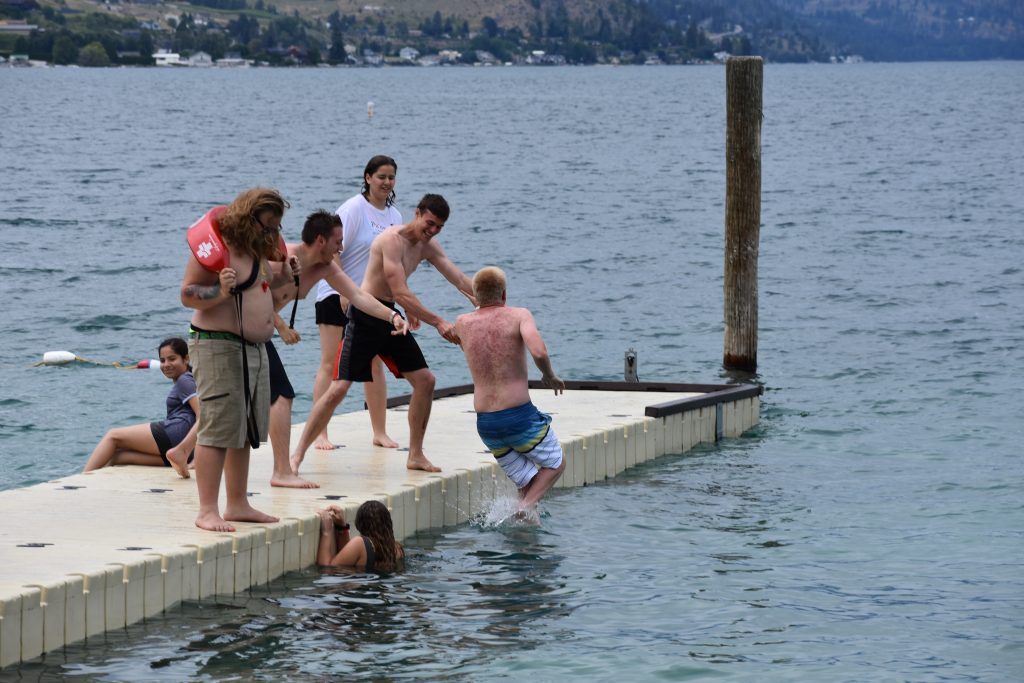 I saw him jump in Lake Chelan on a day when many of the campers considered it too cold to swim. I watched him run to catch up with the group on the hike to Inspiration Point, when his campers considered simply walking too exhausting. 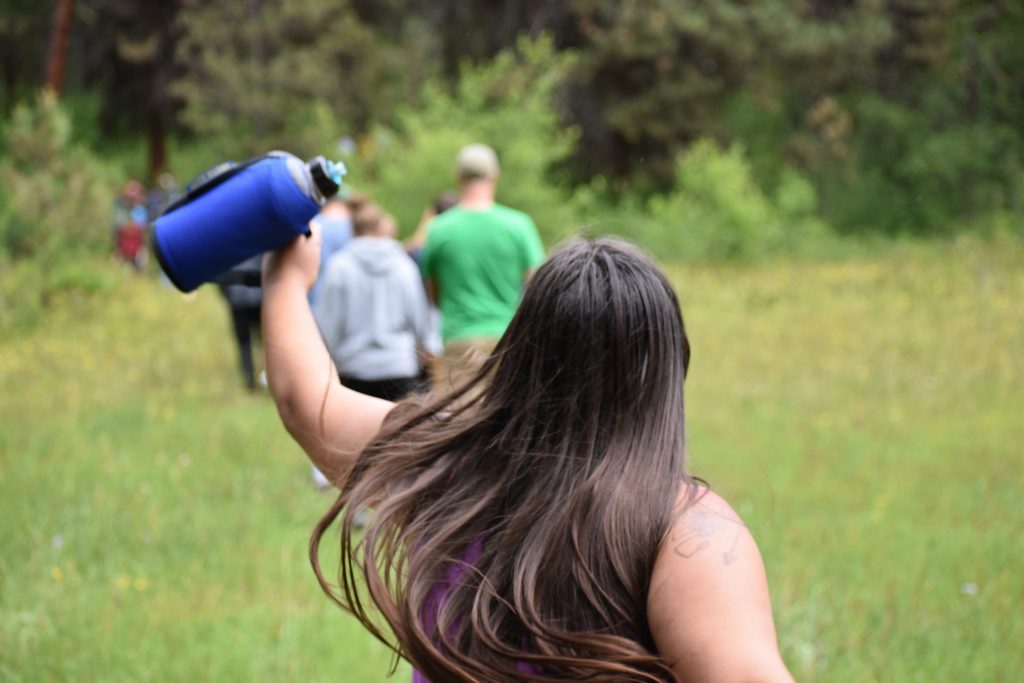 Then there was Choco. He was sick and exhausted and went home to rest a few hours. But as he sought a bit of restorative sleep, he was called upon to do some extra work for the concrete pour on the lodge entryway. It was determined that the slab in front of the Robin’s Roost stairs had to go in order for the concrete to be deep enough. Instead of sleeping, he busted up old concrete gaining some well-earned blisters. 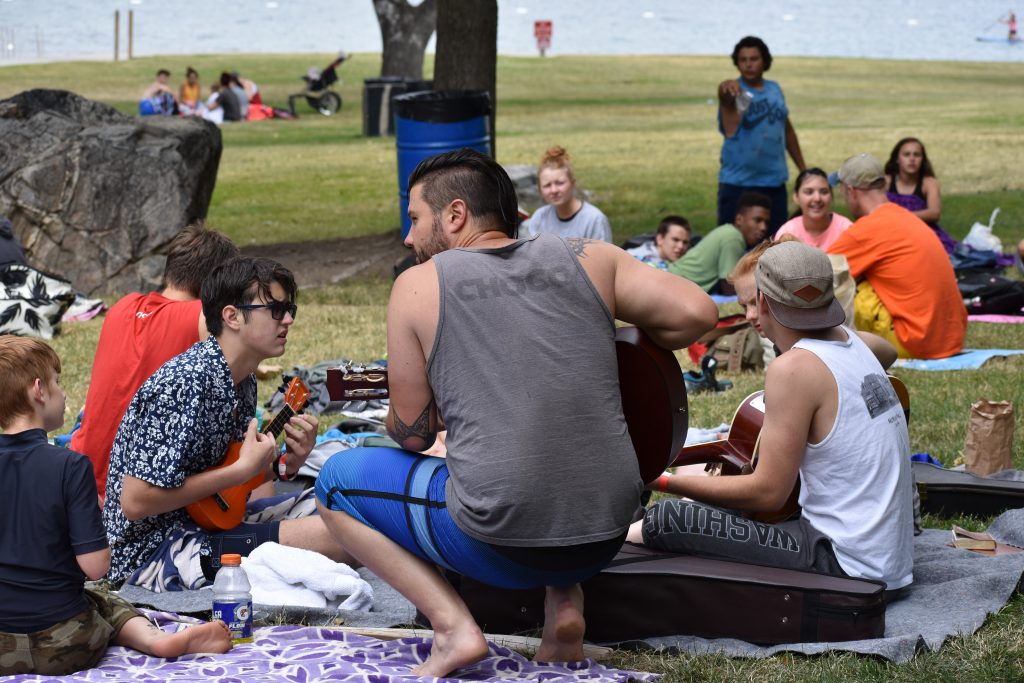 Then the speaker scheduled a Worship Smack Down. What is a Worship Smack Down, you ask? Well, another thing about teens is that you are welcome to invite them to go deeper with the Lord, but you really can’t make them. That’s not as scary as it sounds. This means that they are finally becoming independent and able to choose for themselves. So we give a lot of options at Sr. High Camp. Yeah, everyone comes to chapel, but there are optional Deep Dives, where the speaker meets with any kids who want to discuss the Bible, God, doubts and hurts, and what they really think about these things. There’s always a crowd of kids at the Deep Dives. 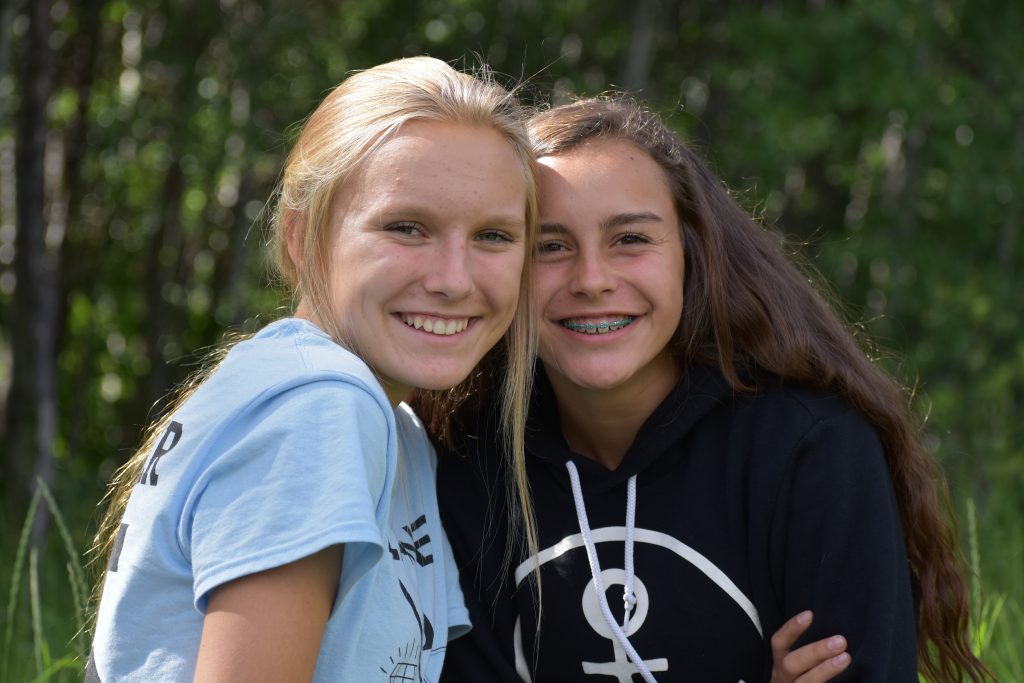 Anyway, one of the options during evening free time was the Worship Smack Down. Kids can play basketball or a game in the lodge or they can go to the meadow and sing worship songs and pray. Teens crowded the meadow for worship and they didn’t just sing for an hour or two, they sang until Scruffy forced them to go to bed at 2:00 am. Choco played guitar the entire time, from memory and in the dark, when he was sick, after he’d already hurt his hands busting up concrete. 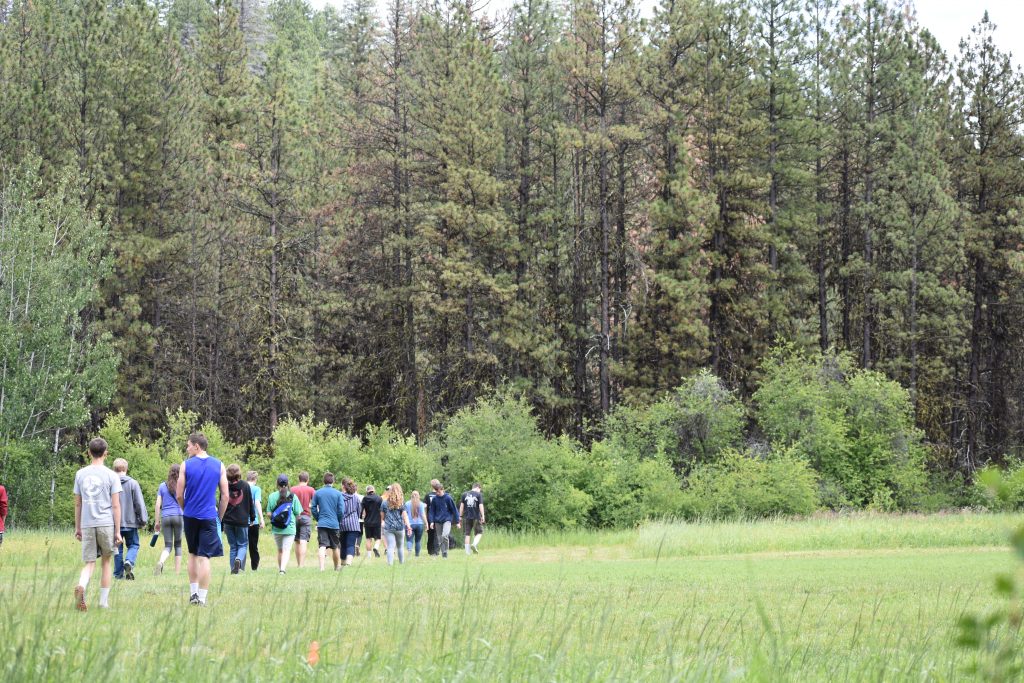 This is Scruffy’s 20th summer and it is easy to grow weary. But we saw kids’ behavior actually change over the course of the week. We saw their words and actions slow and stop and begin to represent their Lord. We saw two friends have a huge fight and stomp off in a fury. The cabin had discussed the monster of Pride earlier. It looked like an utter fail at first. Just two angry young men, holding onto their hurt and pride. But then one of them found his friend and they went for a walk, talked it out, and repaired the damage that had been done. 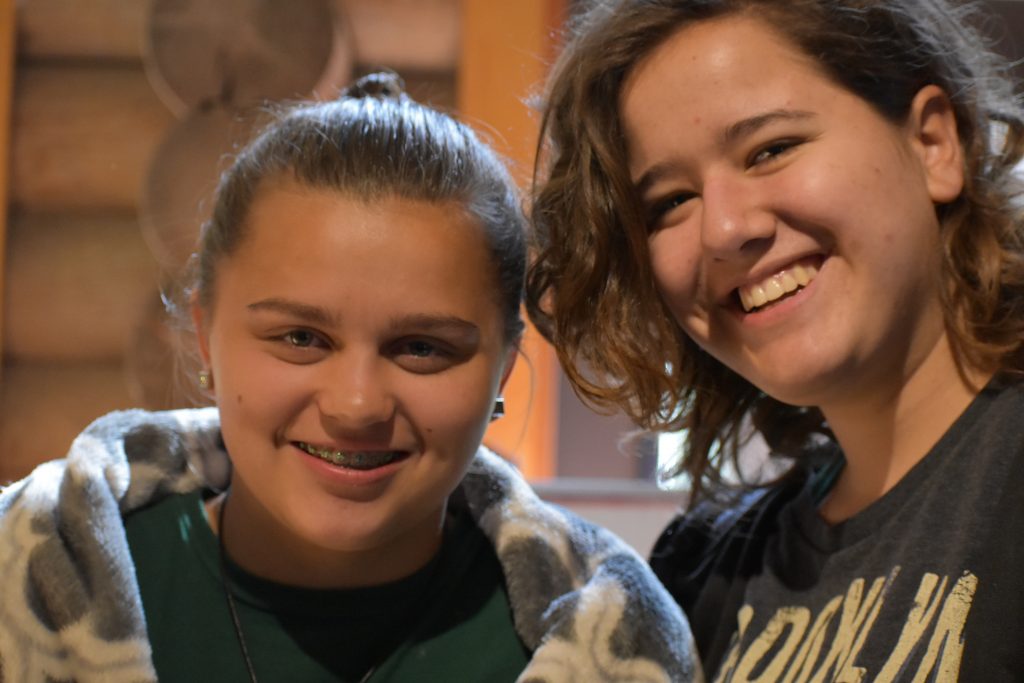 We saw someone use words that hurt another camper. ‘Merica, Scruffy, and Van Helsing had to pull a bunch of kids aside for a serious talk about respect. People chew kids out all the time. How many times have you seen it make a difference? After the talk, both Scruffy and the big sister of the hurting camper looked across the parking lot and saw the girl crying. Scruffy was too far away to hear their voices, he just watched their faces as the conversation unfolded. The big sis marched over, angry, ready to go to battle for a beloved sibling. Then she slowed, the kid was stumbling through an apology that no one had forced him to give. 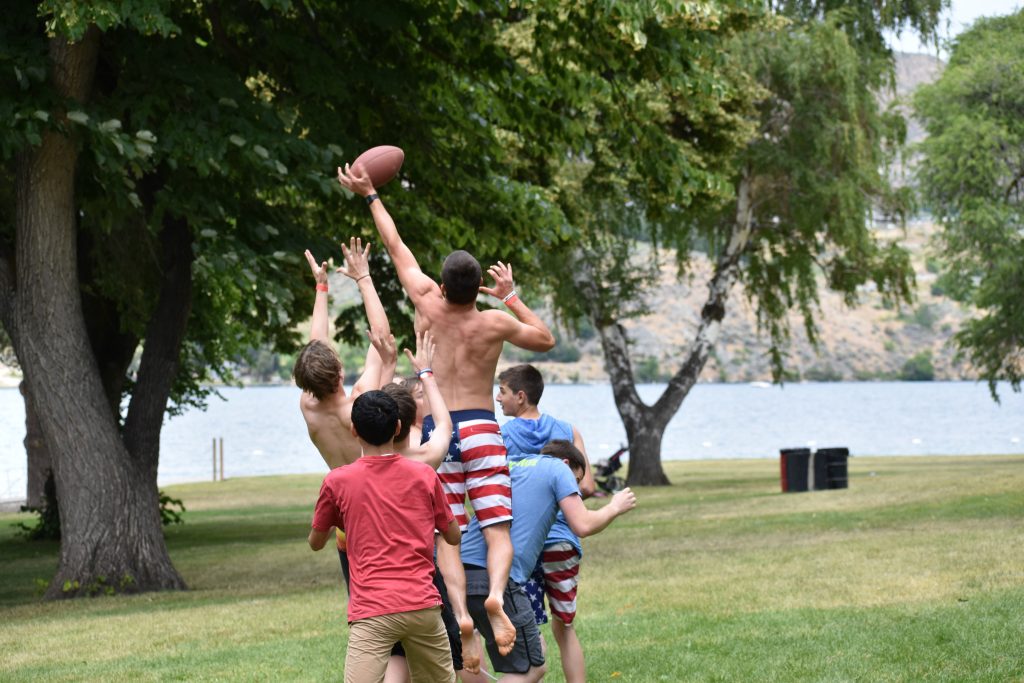 All Scruffy could see were their faces. The girl’s hurt and anger, the boy’s expression as it changed from the cool arrogance of youth to the tears of a young man trying to figure out how to say he is sorry. They stood back and watched the forgiveness that the Lord can bring after He reveals our failures and then gifts us with His very own righteousness. 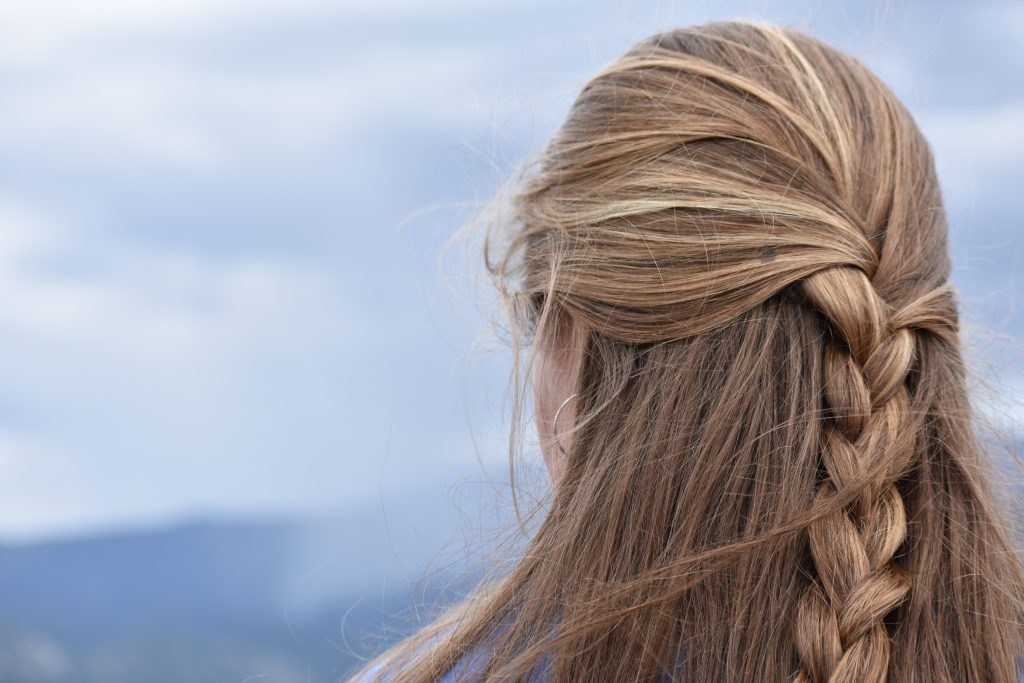 A new creation. We saw that happen this week, over and over again. It is not just the new Christians who need to become new. God is constantly at work if we will allow Him to delve deeply into our hearts. 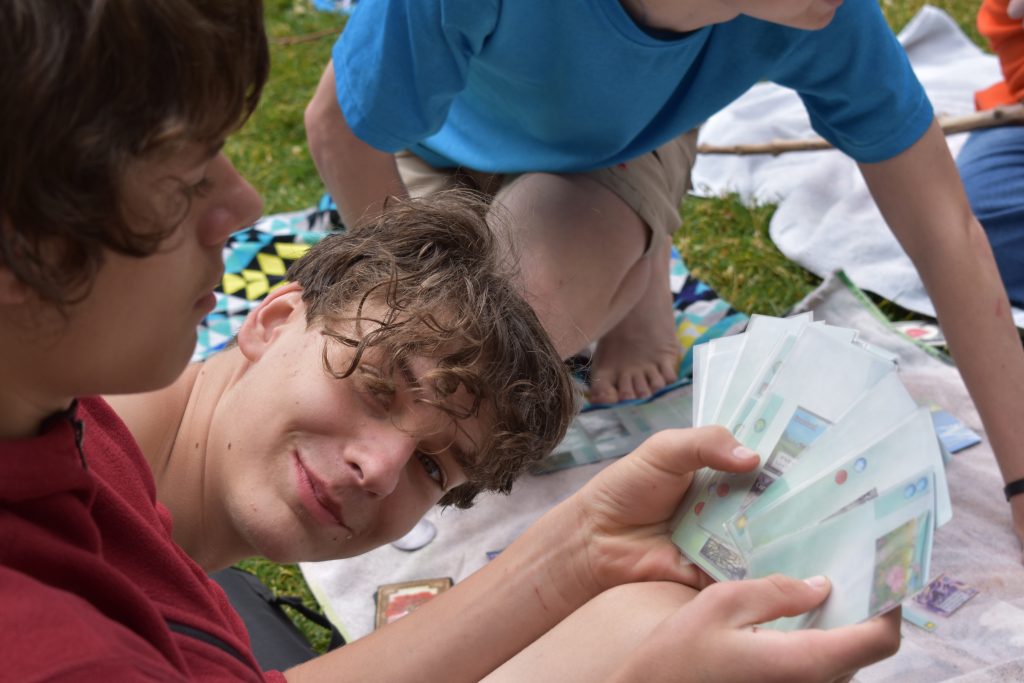 It wasn’t only the counselors who had to pay to play this week. After speaking on the monsters of Pride; Depression; Lust; and Addiction, Van Helsing knew that he had to be in the vanguard if he was going to address one of the most problematic monsters of all. Sometimes, our greatest enemy is ourselves. 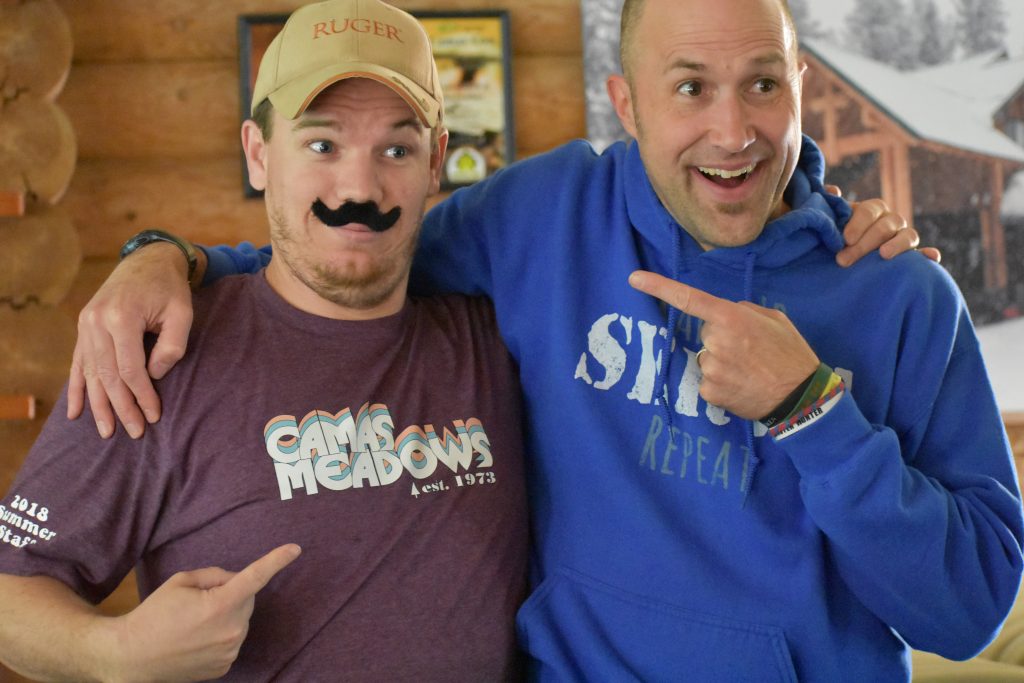 But he was late to that vital last chapel. Late because there were some campers who desperately needed some one on one prayer. The rest of the staff stalled and eventually Van Helsing arrived to reveal the truth we all try to hide, but have known all along, deep inside. 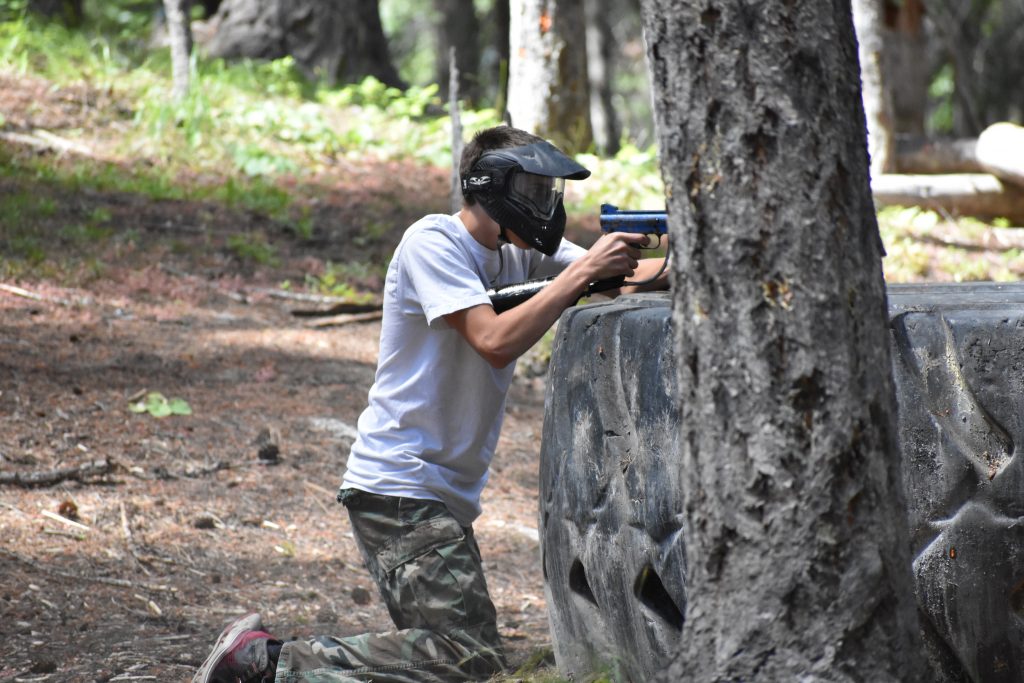 We are monsters. Romans 3:23–“For all have sinned and fall short of the glory of God.” And so Van Helsing stepped up into the vanguard and told the story of when he utterly sinned and failed. The entire camp was silent as he stood before them, daring to admit to what we all attempt to hide. 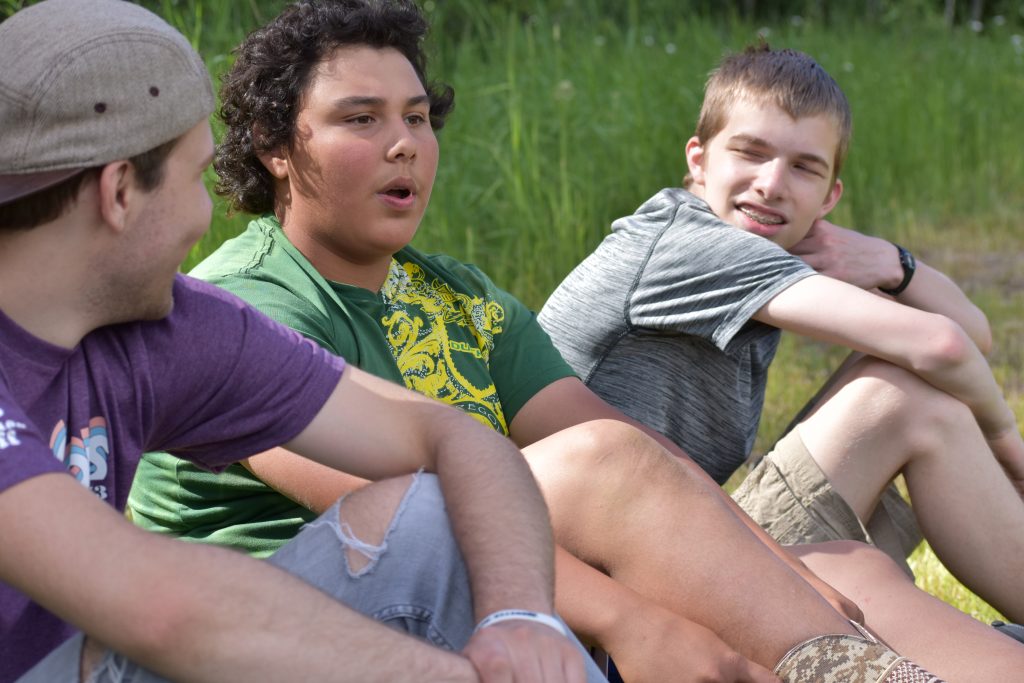 We are monsters. His voice broke in the silence of the lodge as he revealed the path of repentance, forgiveness, restoration, and victory to this group of hurting kids. Scruffy wanted to go up on the stage and hug his friend, but did not. No one wants to mess up chapel. Some of the other counselors wanted to as well, but kept themselves seated. 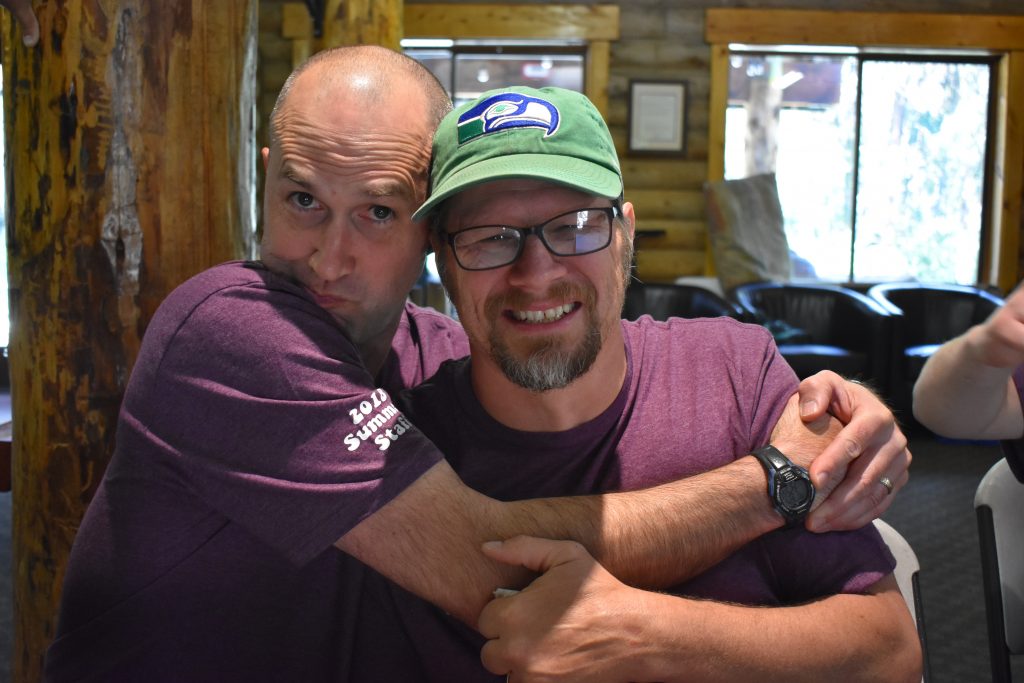 But those campers Van Helsing had been late to chapel to pray with, they led the charge. They rushed the stage and wrapped their arms around him, weeping. Then the whole camp thundered forward to pull him into their arms and cry and sing and revel in the fact that we may be monsters, but Jesus Christ died our death because we are indescribably precious in His eyes. We are beloved. 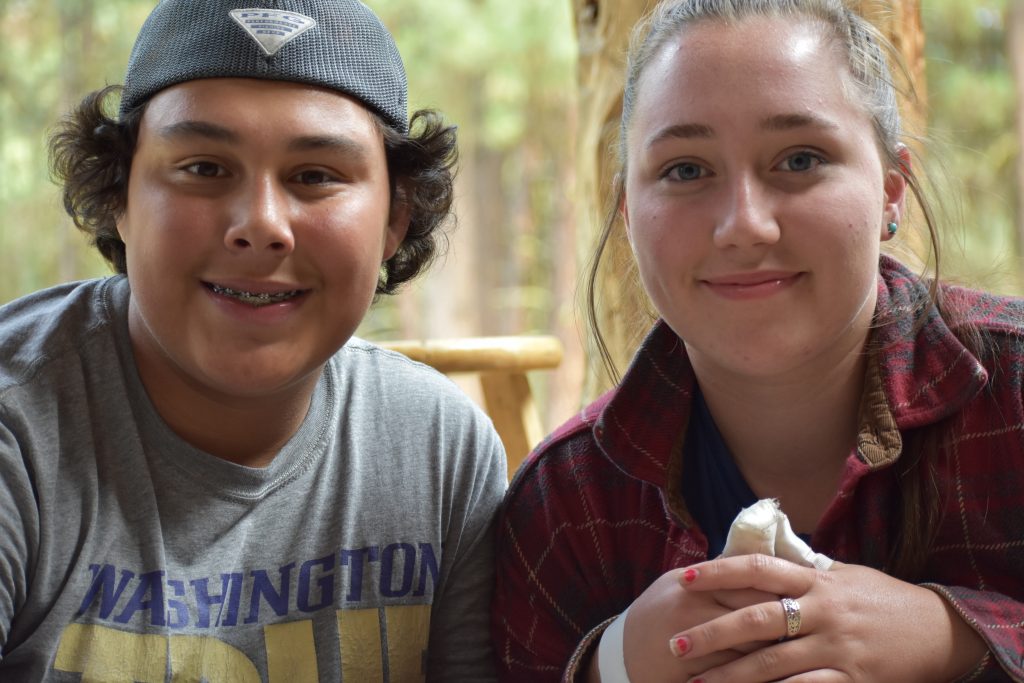 Three kids came to know the Lord this week. Twelve kids were baptized in the horse trough out in the meadow. So many were challenged to make their faith their own, go deeper and be real with God, trust Him with the hard stuff that pulls us down and makes us give up. So many kids found their way back to their Lord this week, after thinking that He had no concern for the details of their lives. 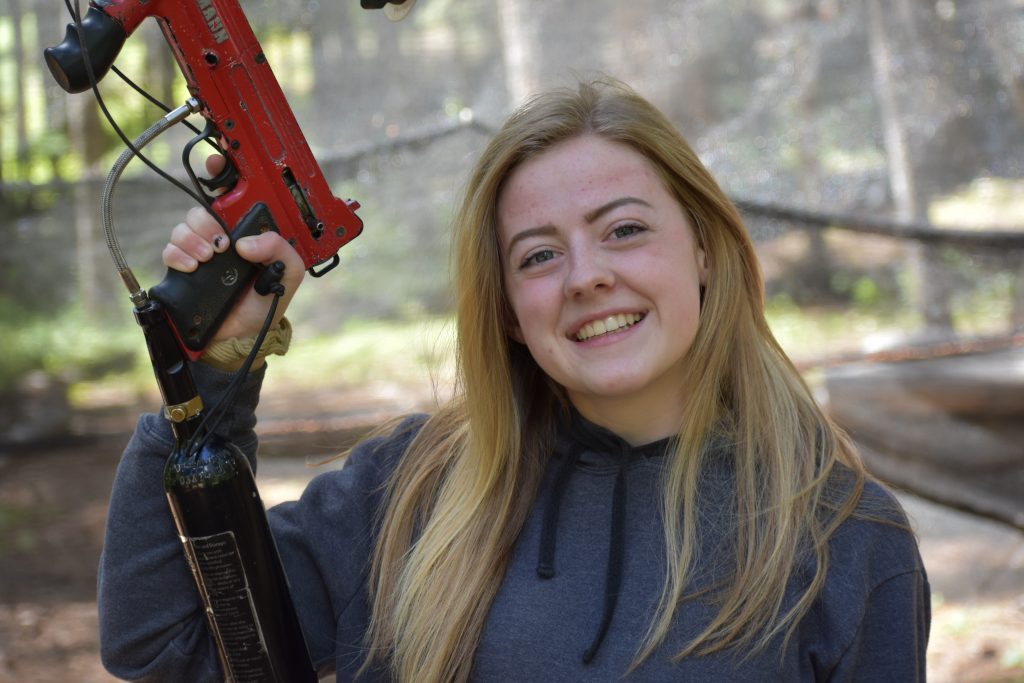 It’s impossible to sum up this week of camp for you. All I can do is tell a few stories, post a few pictures, pray over the keyboard and ask the Lord to touch you as He has me, in the real bits of life, where I live and love and fail and then have the audacity to try again. He is with us. He loves us. He is working His glory among us. Please don’t forget. 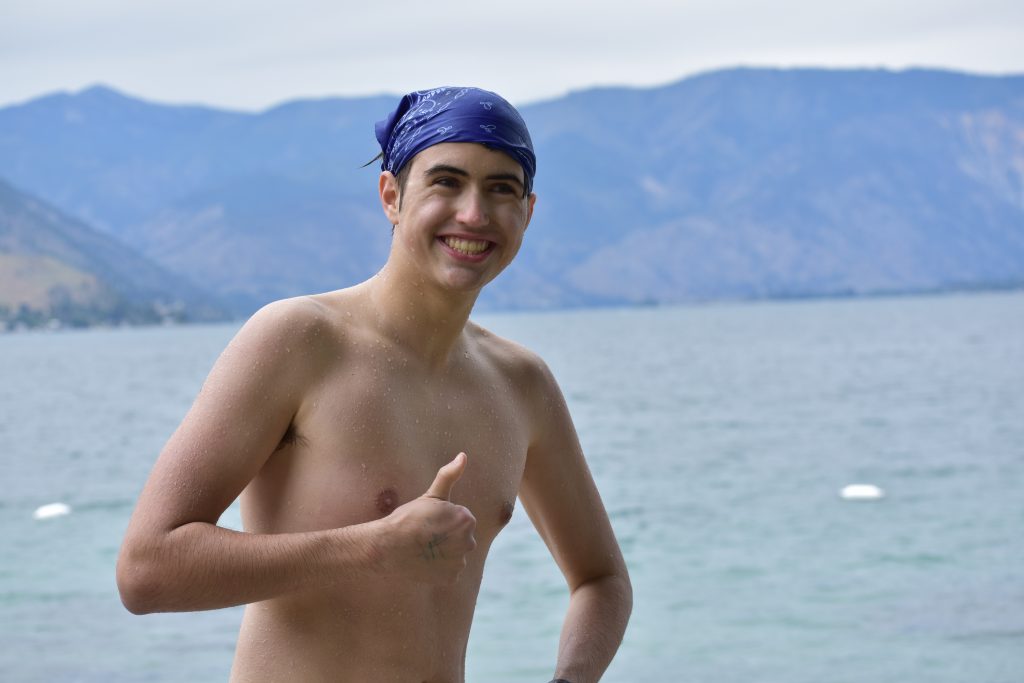 I saw the Creator of the Universe at work this week and I am different because of His attention to the goings and comings of the children whom He adores. Do not think that He is at work only in the chapel sessions or the Worship Smack Downs. He is ever waiting, longing for you to seek Him. Reach out. He will not abandon you to struggle alone. He will not let you drown. Even the darkness is as light to Him. How can we despair with such a Lord and guide as Jesus. 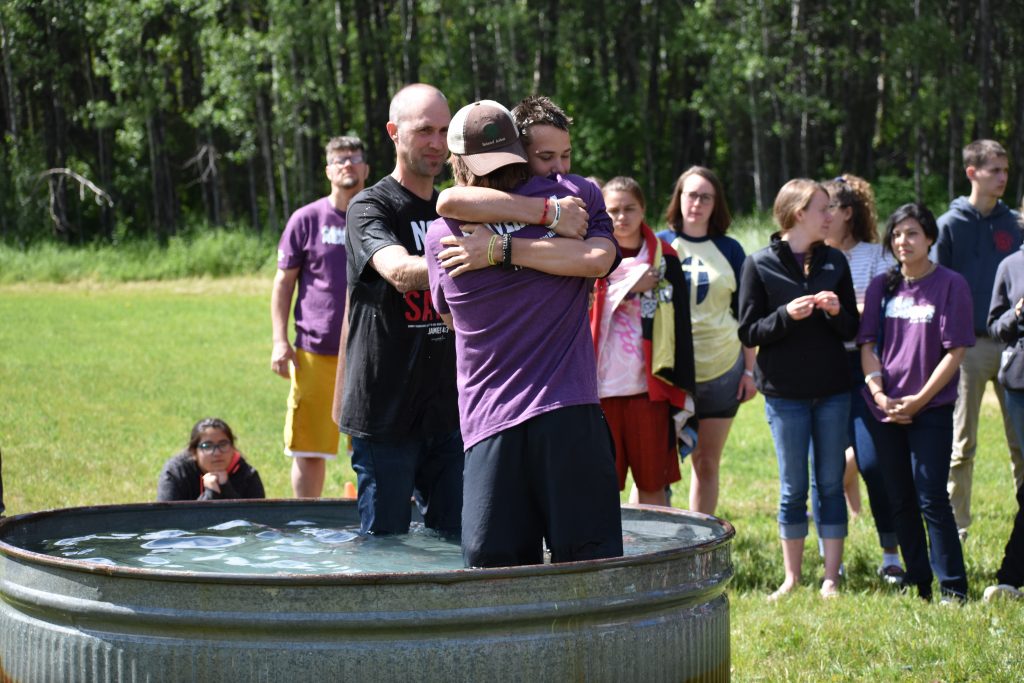 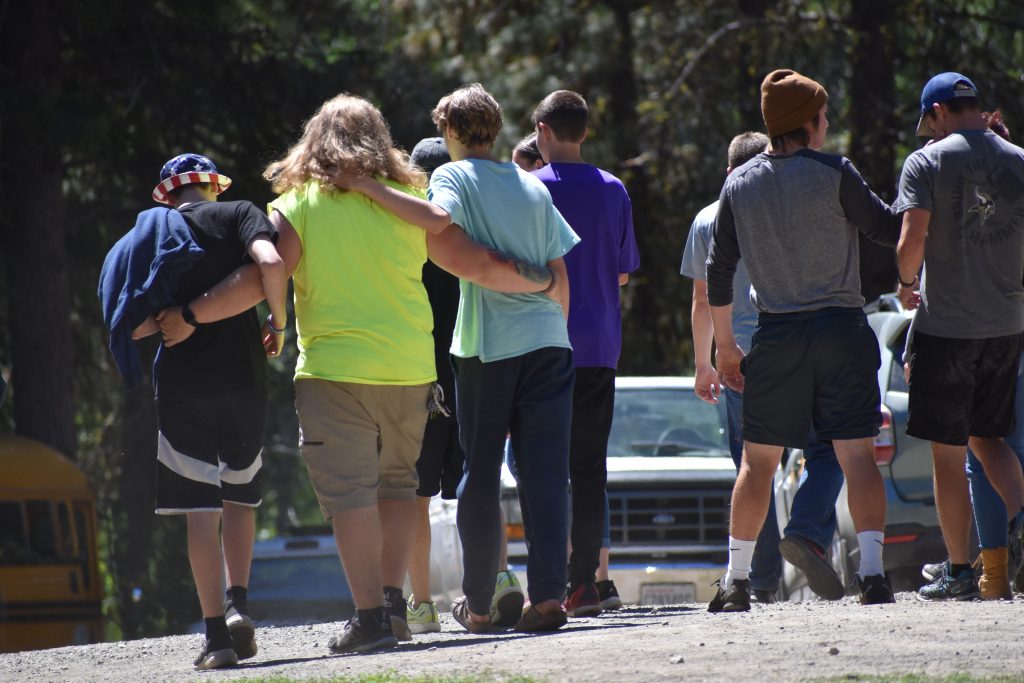