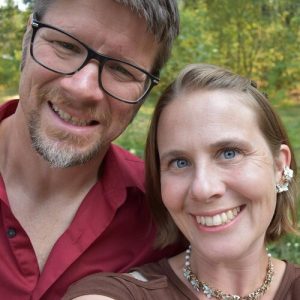 So…how did Scruffy get snatched up into all this crazy?

There is a hair-pin corner on the camp road that we call “Rattlesnake.” If it is icy, there is the possibility of launching oneself onto the guardrail or beyond. When I was a kid, our progress on this tricky bit of road was sometimes halted by insane teenagers slinging their bodies down this slippery slope on runner sleds. It was quite annoying and of course very dangerous. This was Scruffy’s introduction to camp. Yes, before he met Christ he was even crazier than he is now and after I married the man, I found out that he was one of those “foolish teenagers” risking life and limb and making us late for church, ha!

He grew up and ran smack into God at college and moved back home where he was an occasional speaker at AWANA and summer camps. Then he started dating me and wanted to earn some money before we got married. In a bold plan to earn grand piles of cash working with his brother up on the slope in Alaska, he quit his job and flew up to Ketchikan, AK. The bottom went out of the oil industry while he was mid-flight. He spent four tortuous months “unemployed in Greenland” or Alaska as it were, wondering if God even had a plan for him at all. He came home just as our current camp director resigned.

The camp board offered him the job…and we were going to turn them down, but promised to pray about it first.

Scruff wanted the job, he really did. But he’d only been a Christian for seven years, had a degree in landscape architecture, had never been to Bible college, he didn’t think he could do the camp justice. But he told God that he was willing to try, if that was His will.

My motives were less noble. I didn’t want to do it because I knew exactly how hard the job would be. I had just finished college and had never lived away from home. I wanted to get married and go away to Bible school and jump into an occupation that had at least a short honeymoon period. You know that first year where you don’t actually realize how difficult work is going to be. But camp? I’d grown up here. I knew all of the tribulations of camp. But I told God that I would try, if ordered to do so.

And so we rushed away from that board meeting, praying that God would make it clear to us, clear that this job was too difficult and untimely for Scruffy and Boo Boo.

We had a week to give the camp our decision, and by the end of that very day our prayers had miraculously changed. By that evening we were telling God that we really wanted to do this, but we were willing to say no, if ordered to do so. Once we said yes, an incredible weight lifted from Scruff’s shoulders. For the first time in a long time, he knew exactly where he was supposed to be. Sometimes, folks will offer Scruff a job somewhere else. He answers them before they even finish their speech, because this isn’t just a job. It is a call.

And really, aren’t most of the paths that God sets before us too difficult? Do we ever have the necessary experience or talent or perseverance for the task at hand? God knew Scruffy’s heart. He knew his passion and his personality and that he would be absolutely perfect for the job. And God knew one more thing, that we do not need to be ready and able, that is His job.

That will be fourteen years ago this May (23 years now), and I can think of no other occupation that would fit my husband better. He is the man who went down “Rattlesnake” on a runner sled, the man who will never really grow up. Scruffy was made for this place.

What about Boo Boo, the reluctant Camp Director’s Wife? Well, I found that the best things in life are hard. Being a wife, a mom, working at camp. I also discovered a small slice of camp that needed exactly what I had to give. I’d wanted to be a photo journalist as a girl and thought that dream was dead. Guess what I’m doing today? I stand quietly on the outskirts of the action (like the introvert I am) and photograph this wild beauty that is camp ministry. I listen, I observe, I jot down the stories as they happen. I post photos of your kids and write the story of each week on the blog, so that you can be a part of the adventure. Don’t say no just because a task is difficult. You will miss out on everything.

Psalm 139:5–“O Lord, you have searched me and you know me. You know when I sit and when I rise; you perceive my thoughts from afar. You discern my going out and my lying down; you are familiar with all my ways. Before a word is on my tongue you know it completely, O Lord. You hem me in–behind and before; you have laid your hand upon me.”