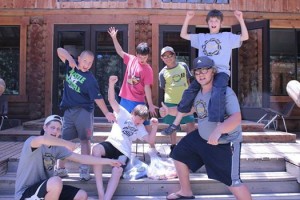 This picture is of our son’s cabin as they celebrate their victory in the cabin competitions. Our boy is on the shoulders of his counselor The Thing. But that counselor is the son of Scruffy’s friend Carrie. Scruffy was his AWANA leader long before he became The Thing. And long before Carrie had any children, she went to High School with Scruffy and was one of the only Christians that he respected, long before Scruffy was a follower of Christ. She was also one of the few “Cool Kids” who was kind to everyone, even a hurting kid from Peshastin, who was angry with God, and didn’t know his place in the world.

So Carrie was kind to Scruffy.

Scruffy was the AWANA leader of Carrie’s son.

Scruffy was the Camp Director who trained The Thing when he grew up to become staff.

The Thing was our son’s wonderful camp counselor.

The thing’s parents stop Scruff at the store, tears in their eyes, and thank him for being part of their boy’s life. Just like The Thing is part of our boy’s life.

And it all started when a teen girl took the time to be kind.

God is love and love is everything.