The mailboxes at the top of the hill, were in sorry shape. Someone had crashed their car into one side, so it slumped in a sad and broken manner. The package box sagged alarmingly, there was a wasp nest inside, and the door would occasionally fall off and hit you on the head as you reached in to grab a parcel from the far back.

A new mailbox structure was put on, “The List.” What is the list, you ask? Well, it is composed of all the many many projects that need to be done. It is quite lengthy and thus the new mailbox structure remained on, “The List” for some time. Then my brother, CamoMan, decided to lend his considerable carpentry skills (first honed during childhood as he constructed dubious watercraft made from old boards, inner tubes, and duct tape … and also a small log cabin that did indeed employ 12″ spikes pilfered from Del) to the cause.

The first step was to move the old mailboxes so that the new structure could be built.

With the help of a Memorial Day work crew, Camo Man built and poured some incredibly sturdy footings.

Why did he need such a large base for this project?

Well, you never know when an earthquake, exploding volcano, or horde of zombies might come through. A mailbox should be sturdy! It should be epic! It should be a force to be reckoned with!

This one should actually be able to handle the occasional vehicle sliding hither and yon on our icy winter roads and giving it a bump.

Massive structure complete, it was time to employ some enthusiastic teen volunteers. One of these is my middle son and one is his friend. Their hair color and style is so similar, that we confuse them all the time. Can you tell which painter is which?

Much enthusiastic staining occurred at this point … as well as no small amount of wrestling.

But eventually, our golden-haired workers settled down and completed the task at hand.

Thus the structure was preserved from snow, rain, heat, and gloom of night. Well, it is actually the sunny days and weather that damage the wood, but the postman’s motto seemed appropriate even though the mailboxes are pretty secure from gloom of night. But the fresh coat of stain will definitely help with the snow, rain, sleet, and beating sun.

And finally, CamoMan constructed a new package box. One without a hornets nest, where the door doesn’t ever fall off, or even hit you on the top of the head as you reach way inside to retrieve a parcel.

But there was one remaining piece needed. Campers continued to get lost while driving to camp. To be fair, this was not entirely their fault. Yes, through the misdirection of various labor-saving-devices (phones, GPS systems, mapquest, Googlemaps …) they drove left instead of right. The took ancient logging roads with trees growing in the center of the trail. They turned onto roads covered in three feet of snow, or conveniently featuring impassible mud in a variety of depths. Finally, Jon Torrence presented us with the much-anticipated solution.

with a bit of wood shop thrown in for good measure …

The project was finally finished! Thank you CamoMan, Jon Torrence, Scruffy and sons, and of course Princess Leia Freyja for your skill and determination to see The Great Mailbox Project reach completion!

Phillipians 1:6–“being confident of this, that he who began a good work in you will carry it on to completion until the day of Christ Jesus.” 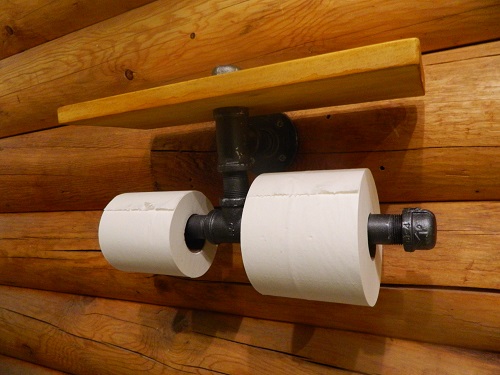 I have been looking for something new in the way of toilet paper dispensers for several years now. The old TP dispensers were installed in the 80’s back when the lodge was new and have weathered many camps since then. Another set of standard industrial dispensers would have sufficed. But I was hoping for something special, something that was unique to camp. I looked online and on etsy. I searched here and there, but every time I found something I liked, it was fabulously expensive. The search seemed hopeless.

Today I am so happy to let you know that Choco made our TP dispenser dreams come true.

Using his handyman skills, he constructed these beautiful and unique additions to our restrooms. I am proud to present to you, the Fabulous TP dispensers of Camas Meadows! 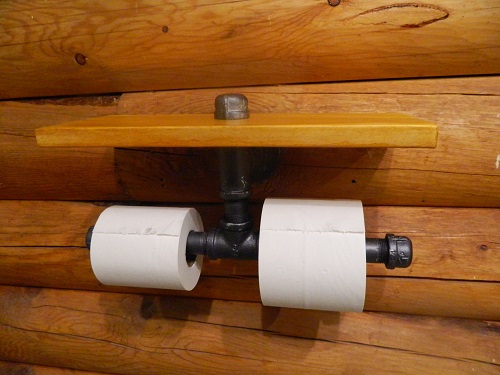