Thanks to the indomitable Hatu, the Camas Staff Reunion of 2015 was both fun and fabulous. Who could resist playing a few of their favorite camp games, even a decade or two later. Yes indeedy, the photo above features camp staff from bygone years with nylon stockings stuffed with tennis balls on their heads. Fun for one and all.

The weekend also included scenic hikes, meadow games, slip-n-slide, worship, and a Lord of the Rings themed chapel session with Scruffy. It was so wonderful to see our three sons sing the camp songs (with motions) and hear their Dad speak. Usually such things are past their bedtime and so this was a rare treat. Several of the counselors that I served with long ago brought up their own children and a new generation of kiddos galloped through the meadow chasing grasshoppers, gave their folks heart palpitations as they wildly swung golf clubs on the mini golf course, and zipped down the camp slip-n-slide screaming. Thank you so much Hatu and everyone who assisted her. The weekend was marvelous! 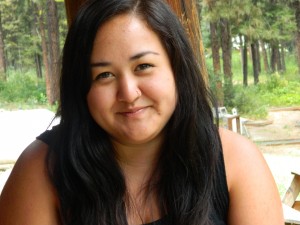 Usually we think of being worn down as a bad thing.

Like when a child asks for a 10lb bag of candy 102 consecutive times until finally the worn down parent snatches up all that sugar and serves it for breakfast all the next week. An unlikely scenario? Have you ever had someone ask you for something 102 consecutive times? But yes, it is unlikely, a 10lb bag of candy would never last a week, but I digress. Yeah, I’m a little worn down, too.

This week I saw people who were worn down, and it was such a beautiful thing to behold.

There was the normal variety of worn down, camp staff giving deeply of themselves after an entire summer of service. Sleepy, teary, sunburnt, and yet still smiling. Loving the kids with more than human love, because God was all that was left.

But I saw something else.

Something that opened my eyes to what we are about here at camp, to the particular brand of service that God has called us to.

Sometimes people expect big numbers from people who work all year for God. 500 souls saved! In only 10 minutes, no less!!!

I am coming to realize that we here at camp were not called to that kind of service. Oh God called Scruffy and I and so many others, I remember the day He called us with incredible clarity. But He called us to a slow and quiet love, to a service of years and faithfulness and time.

There was one young lady who described herself as agnostic. She grew up in a Christian home, but did not know if there truly was a God. Haven’t we all been there, at that honest place? She came to Jr. High 1 and her counselors took her on hikes and to the lake and ran screaming through the meadow to throw water at her in the all-camp water fight. They sang songs and read God’s word and listened to the speaker. Then they sent her home. This young lady determined in her heart that she would come back and that she was ready to give herself to God. And so at Jr. High 2, several weeks later, a new follower of Christ was born. Quietly, gently, over time and with love, God brought her to himself. She was worn down by His pursuit of her.

One of our counselors told me about a girl who had been in her cabin for several years. Then this girl hadn’t been back to camp for awhile. But this year someone paid for her to come. The girl hadn’t ever opened up in cabin discussion, she’d come and played and had a blast and then gone home, year after year before she stopped attending camp. This year she came back. The week wore on until the night this young lady suddenly burst into tears. “I’m not following God!” she cried out. But suddenly she could see God, in that quiet individual who had sent her to camp at just the right time when her heart was tender and ready to bloom.

The picture above is of a young man who chose Christ as his savior last year. A summer ago he considered being baptized as well, but decided against it. But this young man continued to consider this public show of faith, all year, and all week. On Friday, he asked to be baptized in our old horse trough in the meadow. He is not wearing a fancy baptismal robe or listening to the glorious strains of a choir praising God and cheering him on in his declaration of faith. He stands in camp clothes, with Scruffy and his counselor, in a rusty horse trough in the woods, surrounded by grasshoppers and birdsong and friends who love him and are proud to see him there.

Sometimes God calls you to a long and quiet kind of service. You plug on day after day, loving the best that you can, until you feel done. But when you are done, God is just beginning. Sometimes the most beautiful things happen when you are worn down.

This week we had a rental group at the camp. What is the difference between a Camas Camp and a rental group? For the Camas Camps, Scruffy and his crew take care of absolutely everything required to run the camp. For a rental group, the Camas crew provides the venue, the food, and a helping hand when needed. The church or organization who has rented the camp trains their counselors, plans and runs their program, and takes care of the ins and outs of a fun and fabulous week of camp.

It is amazing to watch different churches and groups to see how they do camp. Scruffy has gotten many a fabulous program idea and several new camp speakers from watching and listening during a well-run rental camp.

This week it warmed me to see the counselors pouring themselves out to love the kids, stepping out of their comfort zones to participate in crafts and games and dress up, and taking the time to concern themselves with not only safety and activities but the children’s hearts as well. A beautiful sight indeed.

The photo above? Well, those are my own personal campers exercising our new puppy Princess Leia Freyja. But the campers this week looked like they were having just as much fun as my boys are in this photo.

Camping ministry is multifaceted and providing a beautiful place for various kinds of churches and organizations to accomplish their own ministry with kids is one of the things we love to do.