The Christmas tree is starting to get dry and crunchy. In our case, several of the branches are already bare. People are packing up their candles and wreaths, their olive-wood nativity sets and all those little Christmas villages with the twinkly lights shining from inside tiny windows. But here at Camas Meadows, the day after Christmas marks the beginning of our main winter camping season.

On the 26th of December Scruffy rushes off to town to shop for groceries. Choco zipps around camp finishing up last minute jobs and starting a fire at the lodge so that everything is warm. Then our summer staff: staff from years distant past, near past, and those who want to be staff in 2015 leave their family celebrations and come up to camp for this unique four-day camp.

When I asked my youngest if he wanted to go over to the camp last night he was feeling tired from a day of sledding and told me: “No…unless Thing is there.”

The Thing was my oldest boy’s camp counselor this summer and is a whole lot of fun. I went over to the camp and walked out of the starlit darkness and into the warm light of the main lodge. Kids in their teens and twenties were hanging out together. Playing board games, eating snacks by the fire, talking on the couch, and hauling their suitcases up the stairs to their bunks. And over by Scruffy was our summer intern, Sparks, discussing Calculus and Trigonometry with none other than The Thing.

The boys rushed over to visit their brother’s counselor and have chili dogs with Scruffy. The Summer Staff Winter Retreat is one of our most enjoyable camps. Our boys love to see everyone they grew close to over the summer and wrestle all the counselors between activities. The Thing is from a two boy family and is not frightened when my three boys rush over and all jump on his head. But this camp is also one of our most important. It brings friends together after months apart. The counselors tell stories about the school year, relive their adventures from the past summer, and rekindle their passion for the Lord and His work. This is a chance for the camp family to reunite, for them to learn and grow in the Lord together.

This year our speaker is Jeffrey Chambers, the youth pastor from Living Stone Church in Chelan. He invited our counselors to BBQ at his house this summer during our staff training and we are excited to continue the fun by having him up to speak this winter.

So, while the day after Christmas is a time of clean-up and putting decorations away for many. At Camas Meadows it is time to start our main winter work. Time to gather our counselors and potential counselors together to learn and grow and to find strength and inspiration for a new year serving the Lord together. 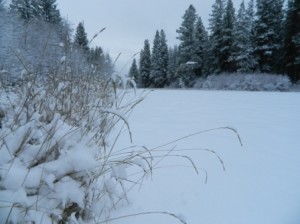 Watching Scruffy scramble around this week trying to get too many things done in too little time reminded me of a story I heard in college about a professor who hated it when his students interrupted his work, only to realize that the interruptions were his work. So why did Scruffy’s busy schedule remind me of this story?

Yes, Scruff was scrambling to get stuff done this week, but four times in a row I saw him stop when he got a phone call from someone who just needed time from a friend. These were long in-depth phone calls, some of them taking over an hour, but he made the time. Why?

What exactly is ministry?

Is it keeping the batteries in the generator shed from freezing? Is it keeping track of all the money that was spent and reporting that to the treasurer? Is it giving a tour of the camp? Is it taking a call from a friend who is hurting? Is it answering that facebook message from a camper or counselor who needs to talk?

Ministry is all of these things.

But most especially, ministry is about people. My husband understands this much better than I do. I tend to look at the to-do list and freak out. Scruff works steadily on the to-do list, but when a person stumbles into his busy schedule, I have seen Scruffy set the schedule aside and tend to the needs of the person over and over again.

So what do we do up here at Camas Meadows that constitutes ministry?

All sorts of stuff. Outside stuff, office stuff, games and schedules, dunk tank and tube hill fun, cooking good food and cleaning up water balloon trash from the parking lot, tracking receipts and making plans for the future, everything. But most of all we want to reach out to people when God sends them into our path. That is our hope and our goal. It is hard to know what to chose, when a thousand things are knocking on your door, needing to be done. But we seek God and do our best and trust that He will finish the work that He started. Everything is ministry when done with a heart for God, but the people, they are sent to us from Him. The workers at Camas, we want to get to the end of our lives and be able to look back and see that we took care of God’s beloved children when He sent them our way.

Galatians 5:6–“For in Christ Jesus neither circumcision nor circumcision has any value. The only thing that counts is faith expressing itself through love.”